Vegetables, yarn, and yarns: all of my passions all in one place.

A LOT of mushrooms

There was a sale on organic baby bellas. We're talking buy 10 for $10 and get one free, so I did what any logical mushroom lover would do. I threw many many cartons into the cart. Of course, the problem, when we got home, became: what in the name of Zeus are we going to  do with all these mushrooms?

I read somewhere that mushrooms keep better in a paper bag in the refrigerator. Thus, I found an old paper bag and began filling it. Somewhere between six and eight cartons later, this is what I had: 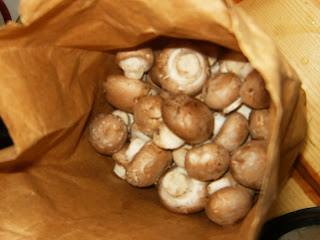 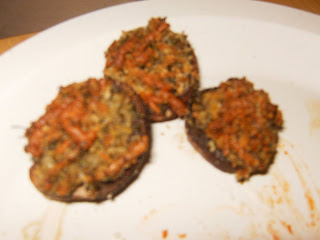 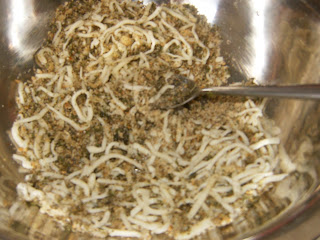 2. In a bowl, combine the crumbs through to the oil. For lack of actual mint in your house, you could do what I did and see if any of your peppermint tea is made solely of mint leaves. One tea packet is about 2 T. I felt silly as I was sprinkling the leaf bits out of the packet, but once they were in the bowl, I swear I wouldn't have known the difference.

3. Stuff the mushrooms and line them up on a jelly roll pan. Cook in the oven at 350 F for about 25 minutes. Perhaps less time if you have a high-burning gas oven. Mine were a little on the crispy side. 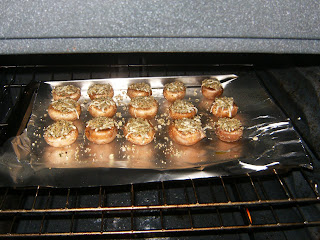 And what better side dish to accompany this feast that some nice linguine. 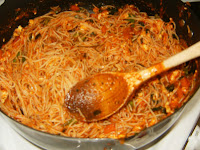 Very succulent and cheesy. I'd even go so far as to say decadent. 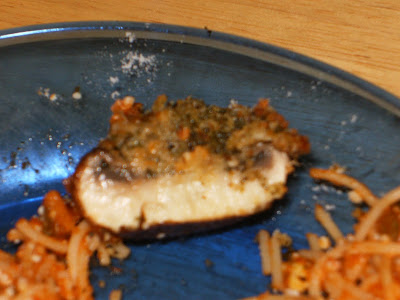 Of course, this meal, large enough for three days worth of leftovers, consumed less than half of our mushroom load. I stir fried the rest. Half went in the freezer for a later date. With the other half, I made this: 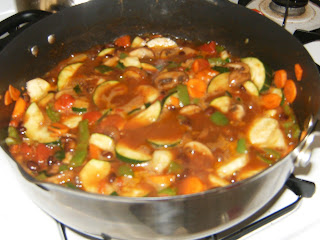 I can't recall now what it is exactly, but it appears to be a bubbling cauldron of mushroom, zucchini, carrot, and tomato with some bell pepper thrown in. Then, there's rice added to the mix, what I assume to be some form of Spanish rice imitation. 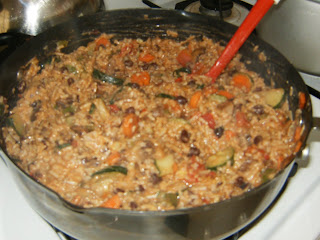 Well, whatever it was, it was tasty too. It's hard for something to not be tasty when the veggies it's made from come fresh from the victory garden.
Posted by MrsZuvers at 8:19 PM

MrsZuvers
Kate Graham is a writer, vegetarian, foodie, knitter, artist, and musician who recently completed her MFA in fiction through the NEOMFA program, by way of Cleveland State University. When she isn’t knitting or practicing her acoustic, she is mothering her ten-year-old son, making something meatless in her fixer-upper kitchen, and/or trying to write something sensible. Follower her on twitter @MrsZuvers. She is MrsZuvers and A Written Recipe Designs on Ravelry. Her novel is called Turnpike.

Books on Food to Read and Love