Vegetables, yarn, and yarns: all of my passions all in one place.

We don't like Indian food. As a couple, my husband and I had this motto to define us. You see, when the husband and I were in undergraduate school together (before we were even dating), we had this fantastic poetry professor, an Indian man named Saleem. We were a smaller, close knit college and so, for kicks, Saleem took a group of students to an Indian restaurant his family enjoys in Ann Arbor. We did not enjoy it. At all. My then toddler-aged special-needs son was also there and didn't like his food either, most of which ended up on the floor no matter what I did to try to stop the rain of rice from landing on the carpet.

Fast forward to a year or so ago at work. One of my coworkers, upon hearing the full story assured me that Indian food is delicious and I really ought to give it another try. I held off, worried about the spiciness of curry and the memory of the bad Indian food of my past. Then, in the library a few months ago, there it was on the shelf: Made in India, a cookbook by Meera Sodha. And I decided it was time to get over my Indian food fear.

I can say this much: we tried a number of dishes in this book and every single one tasted amazing. Bombay eggs were a particular favorite of my son, whose picky-eater status is still very much a thing. (For example, he will eat soft taco shells in a quesadilla but refuses to eat soft tacos. It doesn't make sense to us either.) The recipes in this book were so good that they turned self-avowed Indian-food-haters into a family in love with the idea of Indian night. Go out, get this book, make the food, and savor each spoonful.

For my birthday this year, I even chose to make Indian food. While I was at it, I turned it into a regular science experiment. With the help of the preteen, I made naan, daal, and even homemade paneer, a soft Indian cheese.

We made the black daal the day before. Black daal is made from a type of lentil that isn't so easy to find in a normal grocery store. With the daal out of the way, we could focus on the time-intensive cheese and bread. Daal, it turns out, is time-intensive on its own, requiring near-constant stirring during its long simmer on the stove.

With the daal just needing to be warmed up though, the naan dough was first priority, since dough has to have plenty of time to rise. It said to put the dough in a warm place, so we covered the bowl with a towel and popped the whole thing into the car. It doesn't get much warmer than a car interior in June.

Next up was the paneer. We chatted with the nice cashier at our local (meaning two towns away) Indian grocer and were informed that the recipe for paneer and mozzarella is the same, only to make mozzarella, you stretch the cheese. Two cheeses for the price of one recipe.

Making cheese is actually a lot simpler than I was expecting. You heat milk in a pan and add lemon juice. My son was amazed watching the curds separate from the whey, so cheese-making really works well for science in the kitchen. Then you line a strainer with cheese cloth and pour the curds in. The whey runs straight through and down the drain, leaving the curds behind: 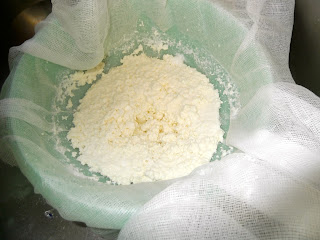 At this point, the recipe said to put something heavy on the ball of curds in the cloth to hope release remaining liquid. So I used the best heavy thing I had handy: 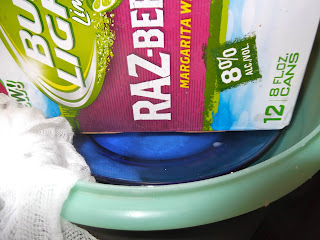 Then, I left the cheese to sit, by which point it was time for the naan. I rolled up the dough into a number of little balls, which then needed to be rolled out into flat ovals like so: 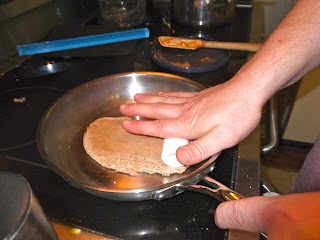 Once they were all rolled out, I put them into a hot frying pan two at a time. 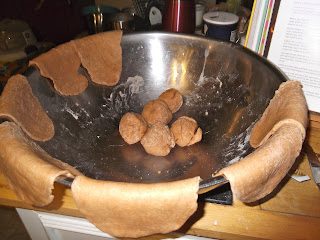 They cook for a few secs on each side for a few flips. It goes really fast and so, never gets boring. There is no wait time. It's like making pancakes on steroids. 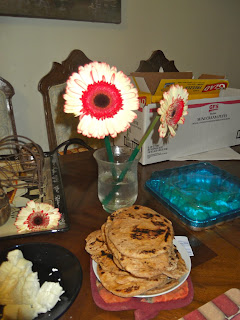 The cheese was finished pretty much at the same time as the naan and the daal, I heated up in a pan while the naan was frying. Paneer looks a lot like tofu and doesn't have a lot of flavor. Like tofu, it seems to take on the flavors of other elements in a dish really well. 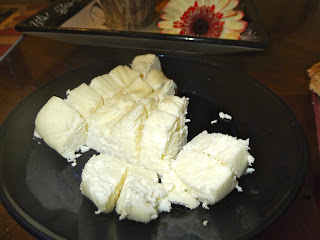 If the cheese ended up a little tasteless, the naan certainly didn't. It was perfect. My Indian food-loving coworker assures me that I got a good char on them. The taste is like a more flavorful, slightly charred pizza dough but better. The daal was rich and lentil-y and utterly delightful. 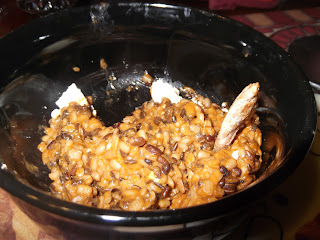 Indian food. People weren't making it up. It really can be quite tasty. And not one grain of rice on the floor.

MrsZuvers
Kate Graham is a writer, vegetarian, foodie, knitter, artist, and musician who recently completed her MFA in fiction through the NEOMFA program, by way of Cleveland State University. When she isn’t knitting or practicing her acoustic, she is mothering her ten-year-old son, making something meatless in her fixer-upper kitchen, and/or trying to write something sensible. Follower her on twitter @MrsZuvers. She is MrsZuvers and A Written Recipe Designs on Ravelry. Her novel is called Turnpike.

Books on Food to Read and Love